Duluth has the amazing Duluth Traverse trail that ties together several mountain bike trails. Even that trail has some road connectors though. It occurred to me that there’s a natural St Paul “Traverse” trail that connects anything along the river with Battle Creek and Carver. It’s most paved bike trails or single track with a bit of quiet road.
Here’s the overview and the Carver MTB component:

Here’s the section from the NE end of Battle Creek (technically NE end is not in park, it's Scenic Overlook)

The area circled in red is where I’d prefer to jump out of BC onto the paved trail. This is at the base of Goat Trail (not a beginner trail!), from the satellite map close up it looks like one could descend a grassy area to the paved trails (see footnote [1]). The map below is from mtbproject (REI). 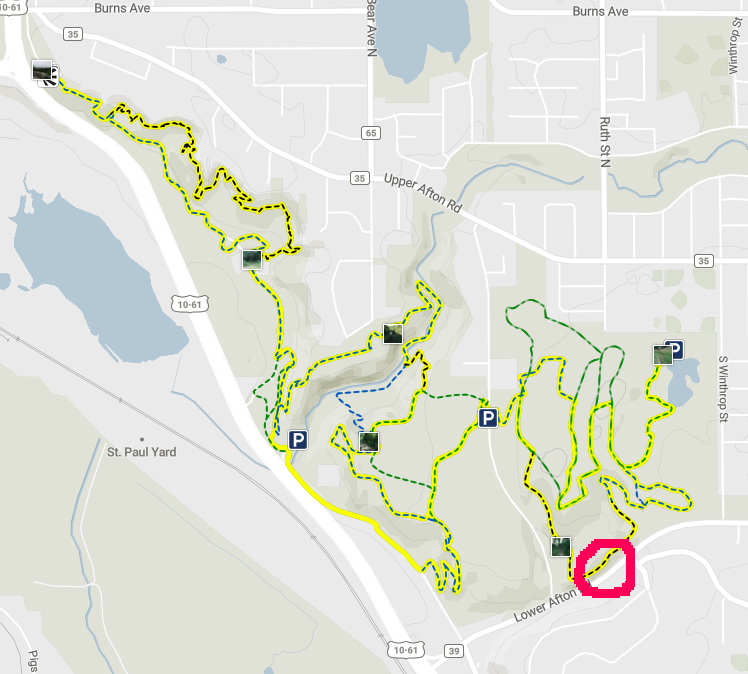 This would be a solid day of road/single track riding for most of us!

Depending on our timing a few segments can be dropped. There aren't a lot of places to stop and eat until the end of the trail. This ended up being a bit over 30 miles but it felt like 50-60 riding my mountain bike, doing the trails, and a surprising amount of up and down.

Segment 2: Batttle Creek Overlook to exit point (mtbproject)
The red line is the path overlaid on the mtbproject map. I think this is probably about 5 miles. The exit, is as above, not official. Will be bushwhacking (see footnote [1]). 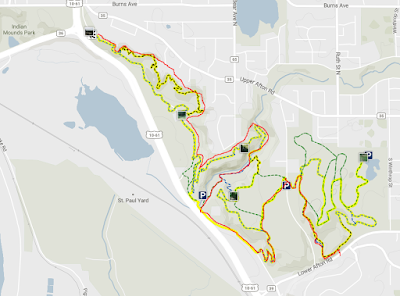 Segment 3: Exploring a curious neighborhood (2.7 miles)
This is St Paul East Side. The "Boys Totem Town" is a 100yo correctional facility for youth. It is to close in July 2019. (When we rode this in Strava you can see where we took a wrong turn or two.) 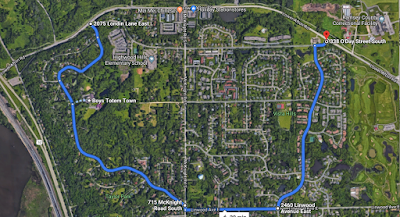 Segment 4: From start of Battle Creek back to the trails
The lower right quadrant here are trails we ski in Winter. This segment also appeared in an earlier post. The top right quadrant is Battle Creek Water Park, there can be ice cream trucks there and there are bathrooms. From here you can see wetlands Battle Creek runs through, but it starts in Battle Creek Lake in Woodbury (I think it is underground until it emerges near the water park).

When we actually rode this (Strava, below) we missed turning left on Upper Afton Road so instead of taking Battle Creek Road to the trails we followed Creek back to Luge Connector. (Battle Creek goes underground again at the end of the park to pass beneath rail and freeway.) 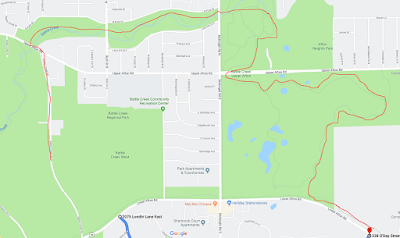 Segment 5: From S Battle Creek Road pick up the trail to Bowl and Luge to Overlook 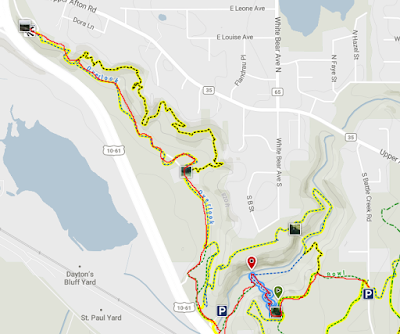 Segment 6 (because I don't like climbing Jefferson, it's ugly)
8.3miles, 55 minutes. There are many eating options here at the end.

And here's how it looked on Strava with a few false turns, about 30 miles (felt longer):

- fn-
[1] We were able to transition from the segment of Goat to the paved bike path -- but it's not easy. There's only one place to transition and it's fairly steep. We were able to walk it down using the bike partly as an aide -- but only because invasive vegetation had been cleared and it was opened up a bit.

[This post has been updated several times since 2018. The more recent maps and links are at the bottom.]
Battle Creek (county trail map, better mtbproject map) is St Paul's mountain biking trail. It’s not only a great trail, it’s accessible by bicycle trail from many directions. Battle Creek MTB Facebook Page: www.facebook.com/battlecreekmountainbike


Riding to start:  Scenic Overlook by Burns Avenue and Hwy 10: 44°56’48.2”N 93°02’19.3”W  This small park with the hidden entrance isn’t technically part of Battle Creek. I’ve been told it’s Ramsey county land and not policed by SPPD. In the past few years it’s had more drug trafficking and is not a great place to park or to be at after dark so I park near Obb's sports bar and cycle over. [5/22, parking is closed there now, but see below for how I start there.]

Update 4/9/2020 - A Facebook post updated notes and a link to the 4/2020 high res map. See also the author's site version.  The 28MB geoPDF version of the map conforms with geoPDF standards, if you import into Avenza.app or similar apps you can see your location on the map. 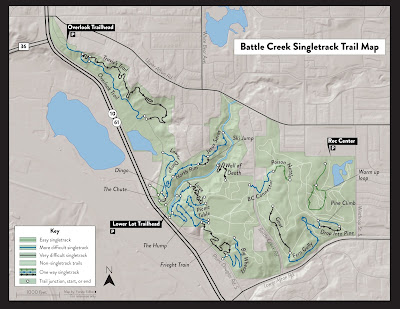 1) Travis’s Trail is one-way, away from the Overlook. This is not optional. If you see someone riding it backwards, please use this statement “the Trail Steward has asked us to remind wrong way riders to ride the correct direction. Thanks for turning around. No, I’m serious, he doesn’t care who you are. Don’t make me call him!”

2) Jesus Saves is the entrance to the North Rim area, not Dingo

3) Lower Dingo is two-way to allow you to get back to the Chute. Dingo is one way downhill. Do not go up Dingo. You are asking for a head-on collision

4) Luge is one way downhill. The Hump to Cop Out is the shortest return if you want to session Luge. Do not ride or push up Luge. Not even the center. Seriously. I’m talking to you, guy on the 26” Mongoose w/out a helmet...

5) Cop Out (located at top of the Hump), Turkey Trot (shortcut between Overlook and Travis’s Trail), Luge Connector (left at bottom of Luge), and The Narrows (straight at end of Luge Connector, takes you to start of the Hump) are not individually named due to space limitations

Chong Xiong marked up a different map with his (long) loop sequence. He starts at the Rec Center. 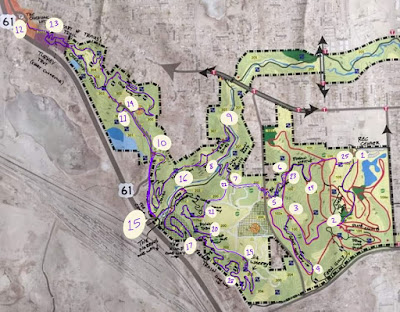 I think of Battle Creek in 4 sections, and as a general rule, think of the most eastern point as "12 o'clock." You will USUALLY be traveling counter clockwise (with Overlook area being the opposite)

1) Overlook trails (connector from Dingo to Pt Douglas, Overlook, Travis's)
2) East of the Valley (Jesus Shaves, Ski Jump, Dingo)
3) West of the Valley (WoD Luge, Freight Train - all  clearly downhill; The Hump, Wheezy - smooth climbing trails, Picnic Loop - this one traverses)
4) Ski Trails area (Goat, Fern Gully, Pines Climb & descent, Warm-up Loop etc)
Most of the climbing or downhill oriented trails should be pretty clear which direction is correct. Most of the others are well signed at points where you exit a connector road or a ski trail. If you are entering one from one of those points, and you didn't see a carsonite sign with a Green/Blue/Black indicator, there's a good chance you're going the wrong way.
Some two ways and ski trail junctions cause confusion
-BC Road connector (from WoD to BC Road)
-From Dingo & the Chute / Pt Douglas parking lot to Old Pt Douglas Road
-Return climb to Goat - a good chunk of this is on a ski trail as opposed to single track
I still get totally lost about the warm-up loop area.
Proceed with caution when you aren't sure which direction or if a trail is two way.

As of 5/2022 below is one of my favorite approaches to BC (ridewithgps) The overlook is closed to parking (it was a high crime area), I park on a residential street not far from Obbs. Feels safe enough. 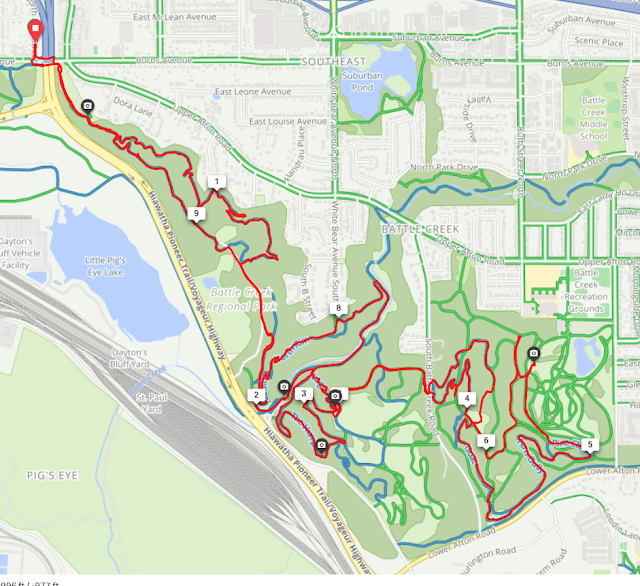