May 26 Ride is a variant of the May 12 ride (Below). It’s about 38 miles in total and it starts and ends at the Midtown Greenway eastern terminus (can park there or ride to there).

This ride is built on the ride below and incorporates parts of them with some new parts in NE MPLS. It’s mostly on trails but there are some (we hope) bike friendly streets as well.

This is a Friends ride Sunday post, but it turned out Sunday May 12 is Mother's Day. My spouse is working and my mother has transcended, so I'll be doing it solo. I'm stopping at Angry Catfish for coffee and to return a defective Otto Lock (are there any other kind?) then North to Coon Rapids. On the way back I'll stop in Northeast MPLS for a late lunch at the Anchor, then head home. Most of this route is on bike trails. 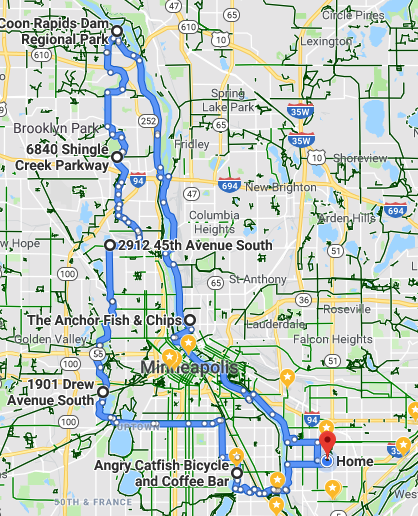 Update 5/12/2019: The ride from Angry Catfish across south Minneapolis then up to Victory Park is really extraordinary. I spent so much time sightseeing and having coffee and pastry at Angry Catfish that I ran out of time to go to Coon Rapids. Instead I had to cut across to Northtown ... 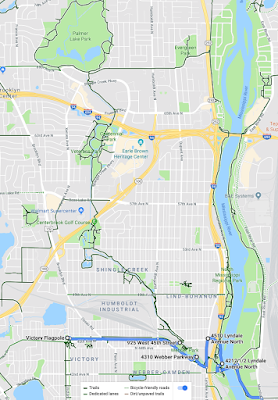 I really enjoyed Shingle Creek and Webber Park. Visiting 13 Ave NE meant I finally understood the state of NE Minneapolis. Sheridan Veterans memorial.... Betty Danger's Country Club ... Northtown, Columbia Park ...
Next Time I'd like to make a loop of the trails north of where I crossed the river. So same way I went, but then something like this: 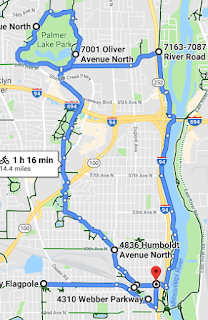 That would be a fun loop. Incidentally, if I had some idle millions lying about I'd invest in real estate out there. For better or worse it's going to go upscale.
Posted by JGF at 5/09/2019 10:26:00 PM No comments: