Snowflake Nordic Ski Center does have skijoring, but only for “members” who have signed up for a season pass -- about $180 for a family.

Jay Cooke state park has a skijoring trail (confirmed by park email, not publicized), but it was damaged by flooding; it should reopen in mid to late 2014. Jay Cooke also has fat bike trails, but they don't appear on the current map. The park doesn't allow skijoring on the fat bike trails. (BTW, Itasca officially supports skijoring -- but park lodging doesn't allow dogs. Bit of a nasty trick there.)

Nanabush trail
A north of Duluth in Normana Township. Based on some hints and limited maps I think there is an entrance near here: 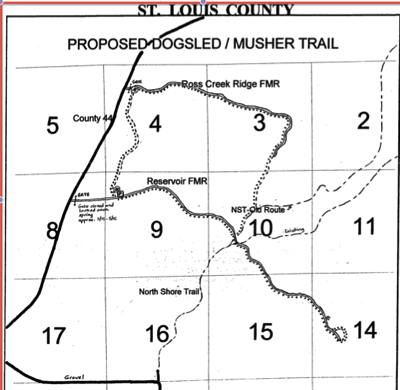