[Dang, realize I wrote the same post a year ago! This version has more detail.]

After several iterations this is the best route I've come up with for getting from Southwest Saint Paul (Macalester-Groveland, Highland, etc) to Como Park Pavillion (and the relatively new Como trails): 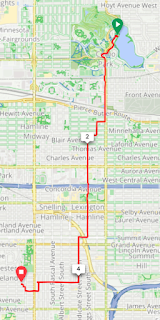 (ride with gps)
(google maps)
This route has minimal elevation changes and is safer than other North-South routes I've tried. It's about 5 miles. Some notes along the way:
Posted by JGF at 6/19/2022 01:33:00 PM