West St Paul loop: Harriet Island to Kaposia Park and Back (plus River to River option)

The Robert Piram trail connecting Harriet (not an) Island park to Kaposia Landing opens up some great new ride opportunities (plus the River to River greenway ... I think!). 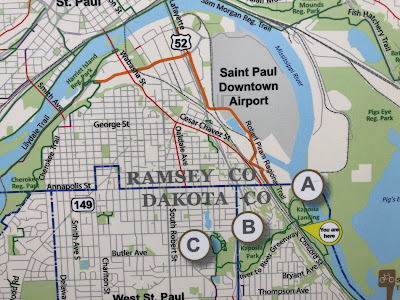 I did a back-and-forth from Paddleford to Kaposia Park / Robert Street last week, but looks like this would be a fun short loop: 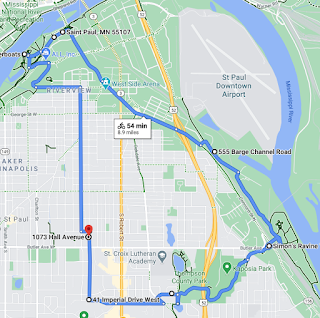 There are many ways to traverse West St Paul from Kaposia Park/Thompson County Park back to Harriet (not an) Island park. Some streets probably more interesting than others, but lots of exploration opportunities.

The climb from Kaposia Landing to Kaposia Park through Simon's Ravine is scenic and a fun climb for an intermediate rider or for a novice on an eBike. It would be a solid climb for an inline skater and bit of a chancy descent.

Kaposia park is supposed to connect up with a lot more in years to come: 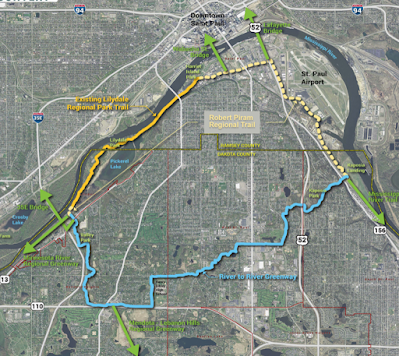 I think most of the River-to-River Greenway can be done now between trails and city streets so I need to check that out -- comparing the above planning photo to a Google version (below) it's only missing a short connection along Hwy 62! The complete loop would a 14 mile ride with some nice climbs and drops: 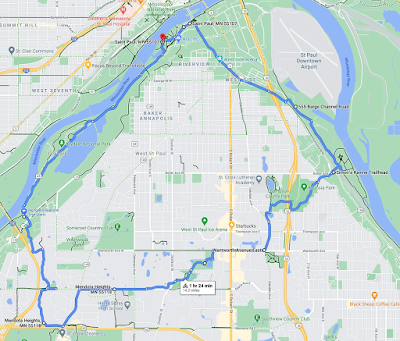 I didn't know of the Mendota-Lebanon Hills regional greenway, that would be awesome if it happens but looks still years away.
Posted by JGF at 3/26/2021 10:18:00 AM