It's only documented in a sign posted on the park trail [2], but William O'Brien State Park (Google map - parking) has a skijoring trail. 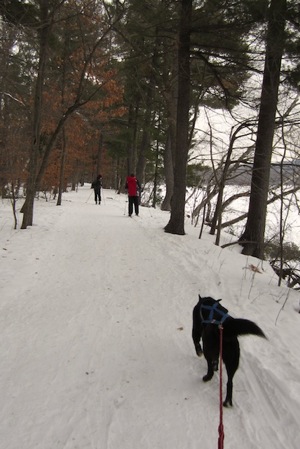 That's not quite the only documentation in truth. If you phone the recording mentions a hiking/snowshoe trail that allows dogs. That's the trail we took on a cold January 1, and we had an excellent time.

The trail is mostly flat but there's an intermediate style descent down the broad closed-for-winter access road. Our daughter walked part of it, but she could have easily snow plowed it. Towards the bottom of the road is the hiking trail we followed, here it's shown on a part of the PDF map: 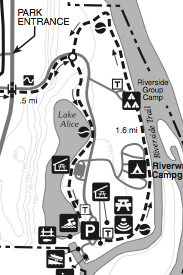 Starting from the lodge follow the trail to the winter-closed road, ski down it looking for the hiking trail sign. Take the trail as shown here; it returns to the road. If the kids are tired take a shortcut back from the Riverside Group Camp site.

This is a multi-use trail with a lot of walkers, dogs and snowshoe use. In places it is quite packed down, but we really didn't have much trouble skiing it. There's usually softer snow and/or ski tracks at the trail margins. There's quite a bit of dog poop at the start (sigh! We carry our stuff out) but not further down.

The somewhat dull terrain is offset by lovely river views and pretty woods.

The park requires a DNR ski pass; we have two we bought online for the season. [1]

There are extensive groomed trails dogs can't go on, we hope to visit those soon. There are also fairly extensive hiking/snowshoe trails south of the park off Broadway avenue. We didn't visit those and don't know if they allow skijoring but I think they do. Call the park first to be sure. (See update below.)

[1]  The purchase process is awkward. I asked and was told they're going to try to get approval to store a PDF of the pass on smartphones to make it easier to carry.

After another great skijoring outing on the short but fun hiking trail, we did some exploring of the mystery loop that shows on the William O'Brian map: 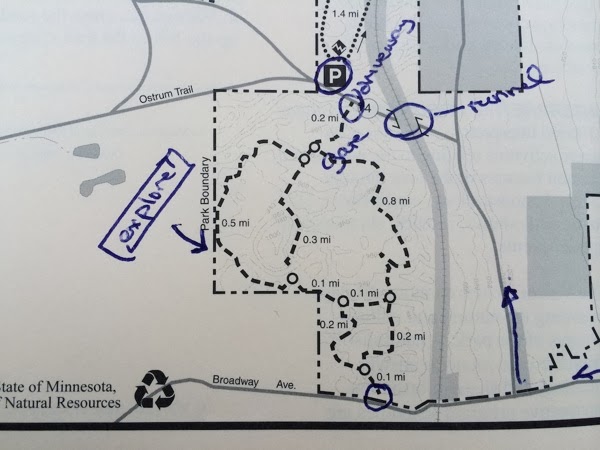 I was told by the Park ranger that this is a new acquisition that they haven't sorted out yet. As of Jan 2014 it's a hiking/snowshoe trail and we can skijor it. (Alas, that will probably change.)

It's hard to find. The "Broadway Ave" on the map is called "Maple" avenue where it meets 95 - directly east of the main entrance to Marine on St. Croix. (Maple is main street of Marine). Watch for signs for "Route 4", follow those through railway tunnel then look for parking on right. Today it was not plowed, only Subarus were parked. The lot is used for access to the Prairie Overlook Trail, but if you park there and walk a few meters west you can see a gate and a steep entrance to the hiking trails: 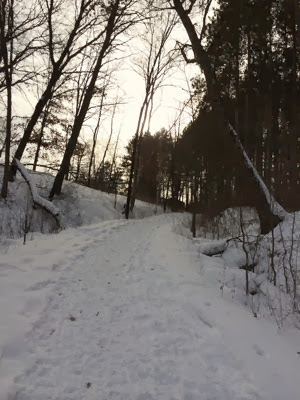 This isn't what most people want for skijoring, but it's awesome for us -- just what we love to ski. Looks like steep terrain, so be prepared to be good or to walk a bit. Trails are obviously well used and likely easy to navigate.

There's another entrance to the south off Broadway, but there's nowhere to park there.

If you go call ahead and ask if the lot is clear. If not you'll need a Subaru or equivalent -- or some shovels.

Update 2/17/14: We skied the Mystery trail today with Kateva, the skijor dog. It was horrible. Don't go there. Forget you ever heard about it. Bleak, dismal - it will drive you to drink. Just move along now...

Ok, I can't do it. I should, but I can't. It was the most fun we've had on a trail in years. Absolutely beautiful; though probably for intermediate skiers. My kids had no problems at all. Ungroomed of course, but on a snowy day just fabulous. We'll be back.